This section is for discussion of OEM police package options and police equipment for the Caprice (both OEM and after-market), as well as after-market upfitting perfomed on our cars.
Post Reply
6 posts • Page 1 of 1

Hi all, new guy here. My last RWD was my 96 Impala SS which got traded in toward a minivan when I started having kids.

Fast forward twenty years I’m trying to get my old car’s spiritual successor but with 2 teenagers on my insurance policy getting a 2016 SS is not feasible so I’m looking at some Caprices.

I found one that has piqued my interest but wanted to find out how difficult it is to remove police equipment and is there a market for the parts?

I was able to sell all my center console stuff so definitely a market for it. Also the front push bars seem to be popular. Worst thing to get rid of are the prisoner cages and that one does not have one so sweet!

Most of the wiring will come out with 1 to 3 plug by the glove box then you might just have to dissect out any antenna and light bar wires in the headliner. Good weekend project. That looks like a red and blue light bar, not sure they would sell it with that on there to a non agency. ANd unless you could make it non blue/red you might be able to resell.

Then most likely your horn and rear windows won't work but those are quick fixes to bring them back to civilian mode.
Steve Walker
Azusa, CA
'11 PPV 9C3 Huron White
Top

As stated, definitely a market. Sold my center console stuff, and would've sold the headlight if I wasn't so lazy getting pics of it thrown up. Good news is that push bar doesn't look like it needed the front bumper hacked to pieces (mine was such a case). Removal of the wiring isn't bad. Like Steve said, it's a nice weekend project, and was good to familiarize myself with removal of interior pieces and the like. The horn was a super simple fix for me as well. Good luck!

As Steve mentioned, I'd be surprised they'll let that car go to a civilian. If they do, though, you can make back a fair amount of the purchase price selling off many of the LEO-specific parts, especially the light bar and laptop mount.

And welcome! There are several former- and current-B-body owners here!!

Thanks all! They told me that they can sell to a civilian and that it’s up to be to make sure I’m not in violation of local laws by driving around with the equipment still attached.

They sent me some pictures of the hole for the wiring of the light bar and how the ram bar is mounted.

I’m just nervous about the daunting task of removing it all but it’s only got about 30k miles and it’s a V6 which works out better for me as a daily driver.

Unless you have someone lined up to fill the holes with metal plugs and repaint, I say keep the antennas in place. The bases are usually metal, and have o-rings to seal them to the body, so they're pretty weather-tight. We fixed the hole for the light bar harness by capping it with a GPS antenna: 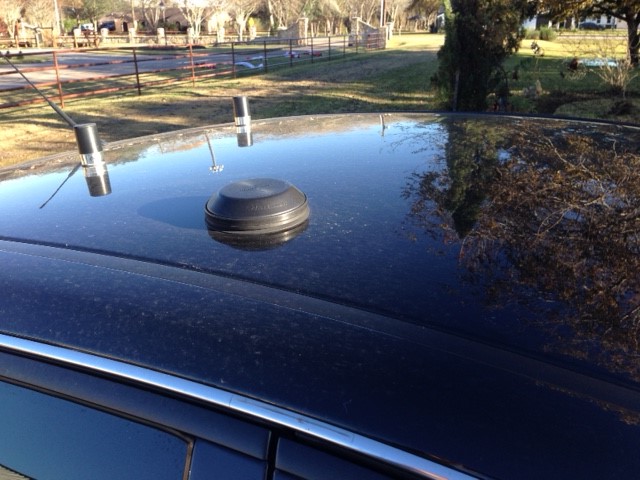 It looks like the push bar can come out without leaving much evidence it was ever there. You'll probably want a second set of hands to help hold things while you unbolt it, though.