Tell us about your new PPV, show us some pictures, let us know how you did what you did!
Forum rules
One thread per car per member in this section. No thread hijacking in this section please, if it's strictly a tech discussion please move it to the appropriate sub-forum - moderators can assist if needed or requested.
Post Reply
32 posts

Got a lot done today

Wanted to finish stripping down the SS, maybe I can even get it out of the shop to make some room. Starting in the engine bay, I removed the cowling, the insulation, and heat shield over the tunnel area and started pulling the engine bay harness that goes back into the body. Went ahead and removed the booster and master to get them out of the way. Oddly, the harness comes out on the passenger side, goes to fuse box, EBCM, booster, master, and then back into the driver side firewall. So I needed to finish stripping the interior to be able to unhook those connectors from the firewall.

Took out the dash harness from the dash support structure, and then was able to remove the support from the car. Also removed the pedal box at this time since there was nothing else holding it in. With the support out of the way, I was able to unplug the rest of the dash harness, and pull that out of the car. A couple more bolts and the HVAC boxes come out from the vehicle as well, I think you could remove it with the dash structure but I'm not sure how you'd manage to properly remove all the connectors.

Out next was the carpet, headliner, and sunroof. I started pulling the body harness from along the chassis, pillars, and roof. Most of it is disconnected and ready to go, just a bit more to unhook at the battery/fuse box area. 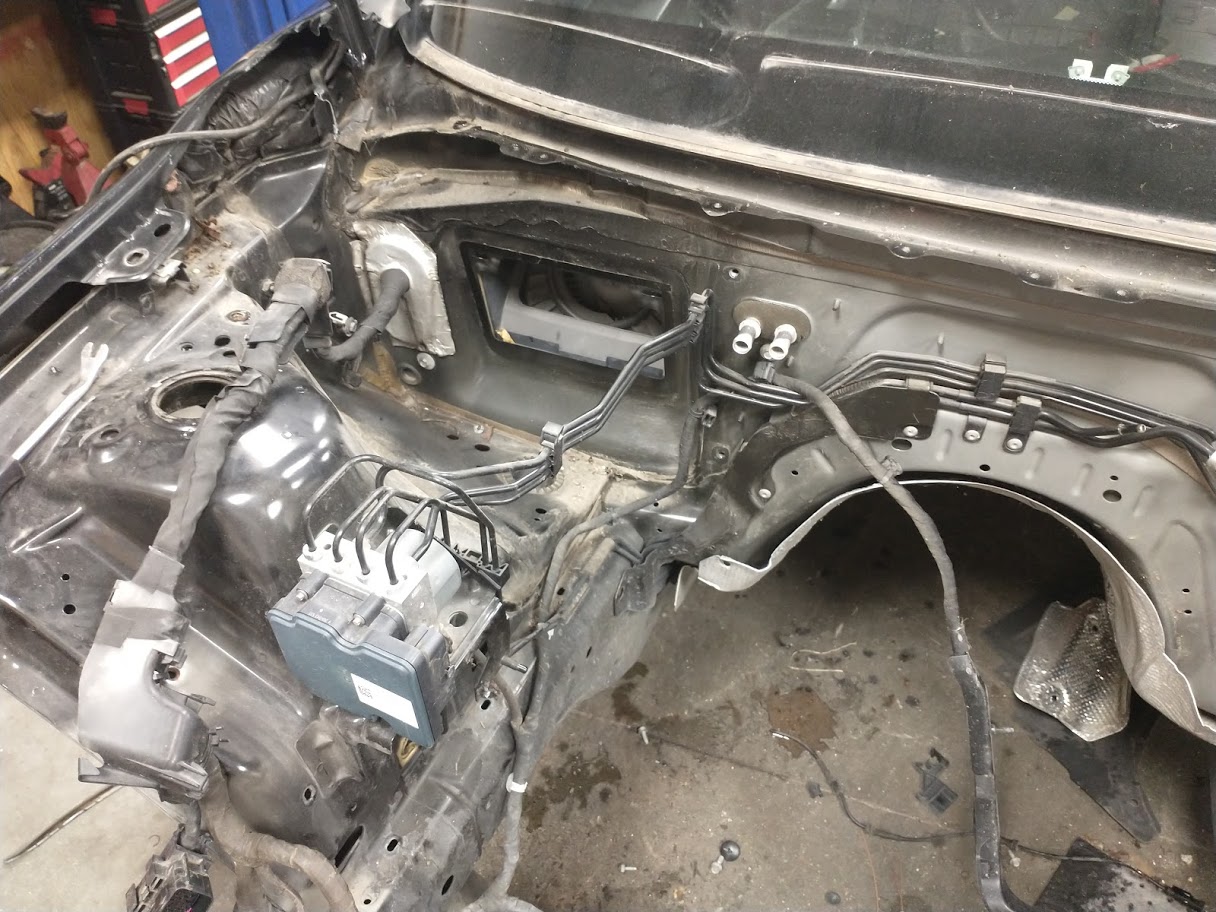 So I took a break from polishing my director of photography awards and made you a video:

smwalker wrote: ↑
Tue Apr 27, 2021 9:48 pm
So I took a break from polishing my director of photography awards and made you a video:

That's very useful for visualizing what you were saying, thanks for taking the time to make it.
Top

You guys are nuts. Awesome. I enjoying living out these builds vicariously through others

Both gone but not forgotten...
Top

I sold it in August or so to another member to start getting parts for this swap. It's currently for sale - I think he has too many cars and doesn't get to drive it as much as it should be driven
Top

Todays progress almost marks the end of the stripping stage. Got the rear subframe and fuel tank out. Stripped down the subframe and salvaged the parking brake module, diff, axles, and springs. Rest is scrap to me. Very rusty and driver side was tweaked somewhere although I couldn't see any arms bent. I was hoping it was in better shape and I could have just put the whole thing in the Caprice. But mine should be in better shape than these. Also I might try and find a Camaro diff over the SS diff. I do think 3.27 is going to be the best bet with the manual and the blower. 3.45 was a really good fit manual N/A but I think boosted it's going to be too quick in the gearing with 3.45.

Disconnected the last few odds and ends and removed the body harness from the car. So many modules. Only thing left in the car are the door panels and the antenna. Not sure how the fuel line is run on a 2014 and up V6 car, but on the earlier models, it come out in a different location than the V8 cars. Since you are running a blower, the V6 fuel line may work for you.

Yeah I'm not sure as I haven't gotten into my Caprice yet. But lines were damaged under the car on the SS (and they wouldn't be long enough anyway). So we'll cross that bridge later if we need to
Top

Had a couple obligations today so didn't get a ton done.

First I ground off the mounting tabs for all the electronic parking brake module and cables. Going to clean them up and either re-create them or reweld them onto the Caprice cradle. I'm honestly surprised that GM would go through the trouble of having two different cradles if this is the only difference, especially considering that the Australian Caprice would have had electronic parking brake just like the SS. However, it is welded on separately so I guess the $0.50 they saved in brackets justified having to catalog and inventory 2 different (massive) part numbers.

And just in time, my casters showed up from Amazon. Makes moving the shell around an absolute breeze and saves me from having to reassemble things that probably won't go back together from the accident. Not like it would be much better anyway, since the car has no rack and pinion, no brakes, and no column.

Took off the doors, and the one side skirt that is still good. Aside from that, only good parts left would need to be cut out now. Since it is of no more use to me and just taking up space, I went ahead and loaded it up onto my now empty trailer. It was ..... interesting. But it's on there now.

Going to organize the SS parts hoard in the shop and then bring in the Caprice. 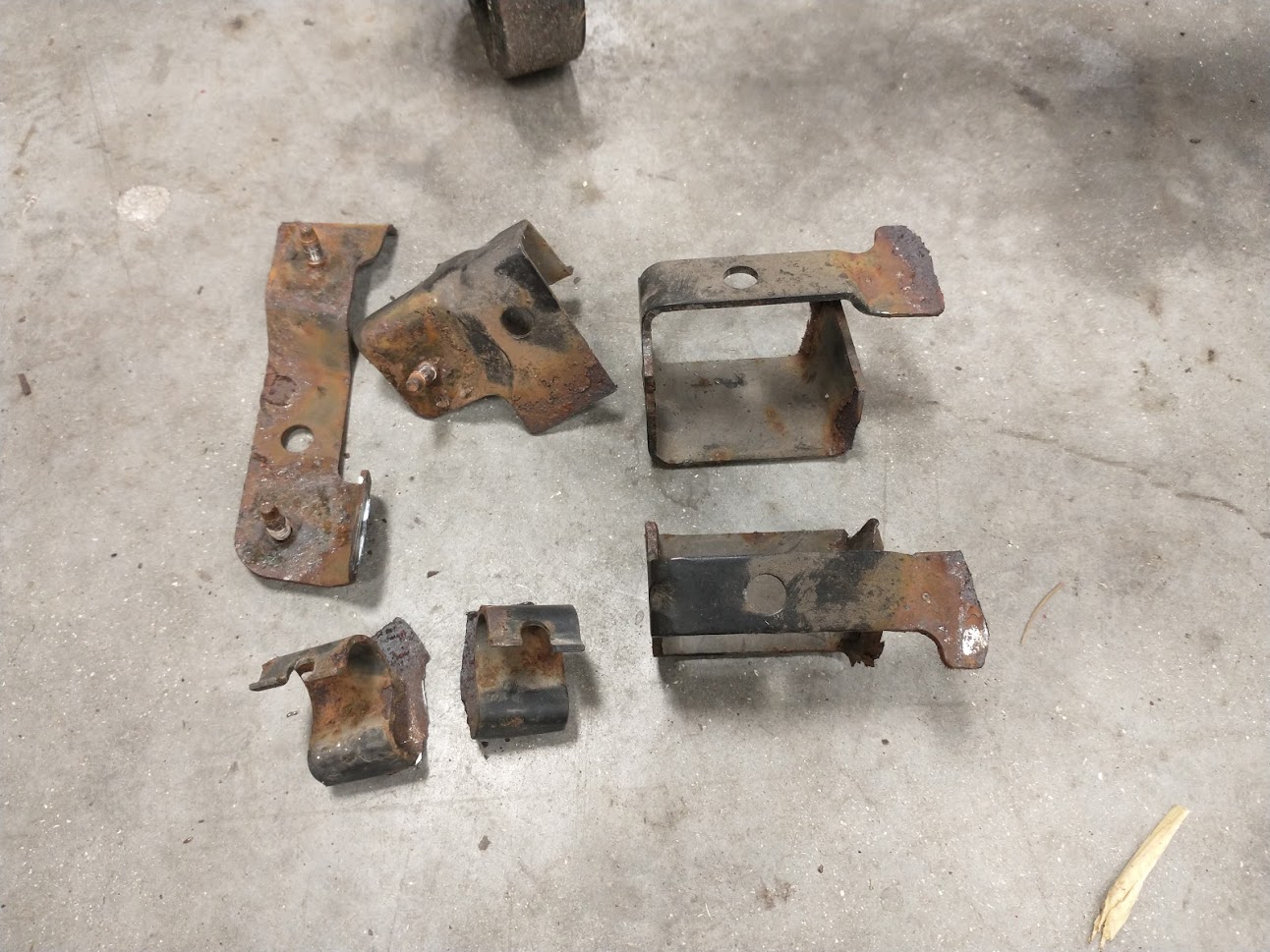 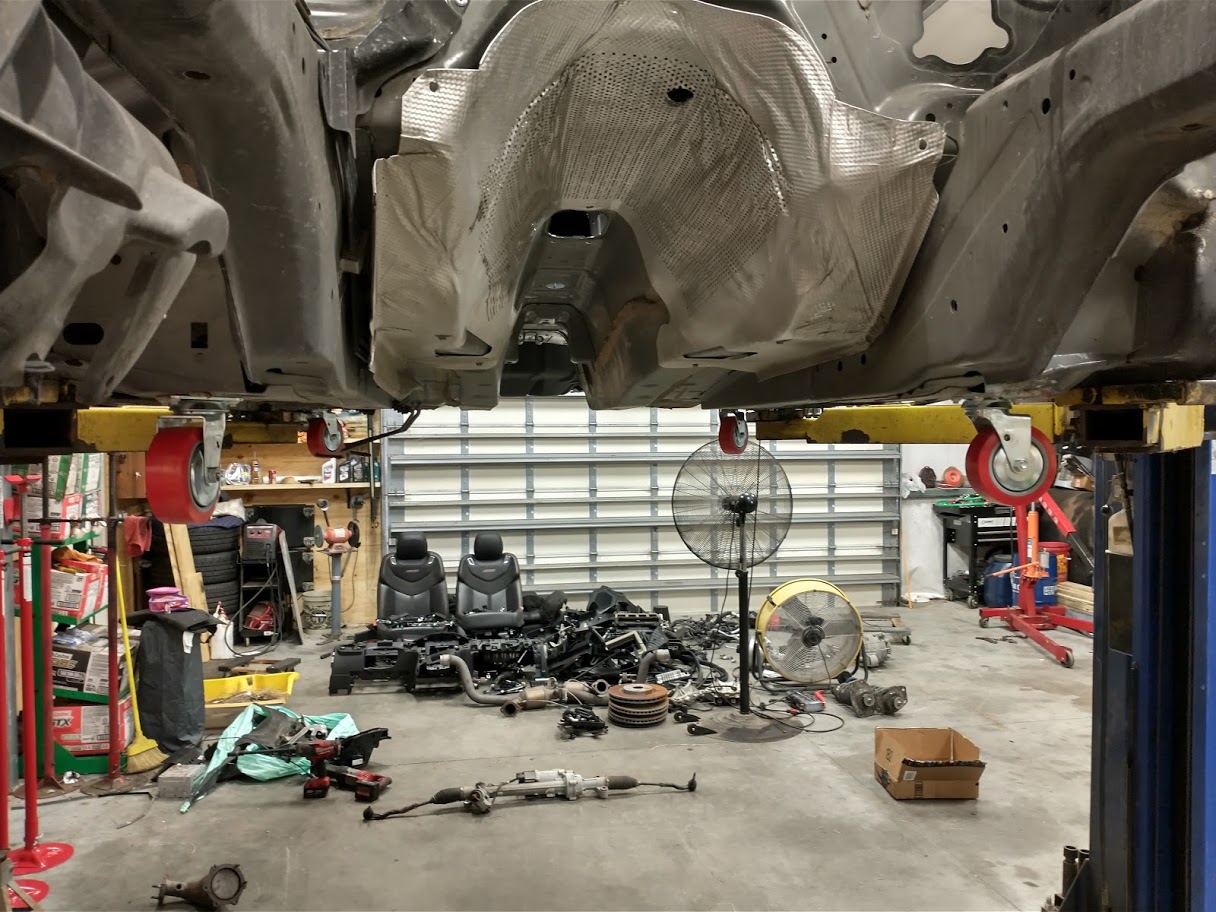 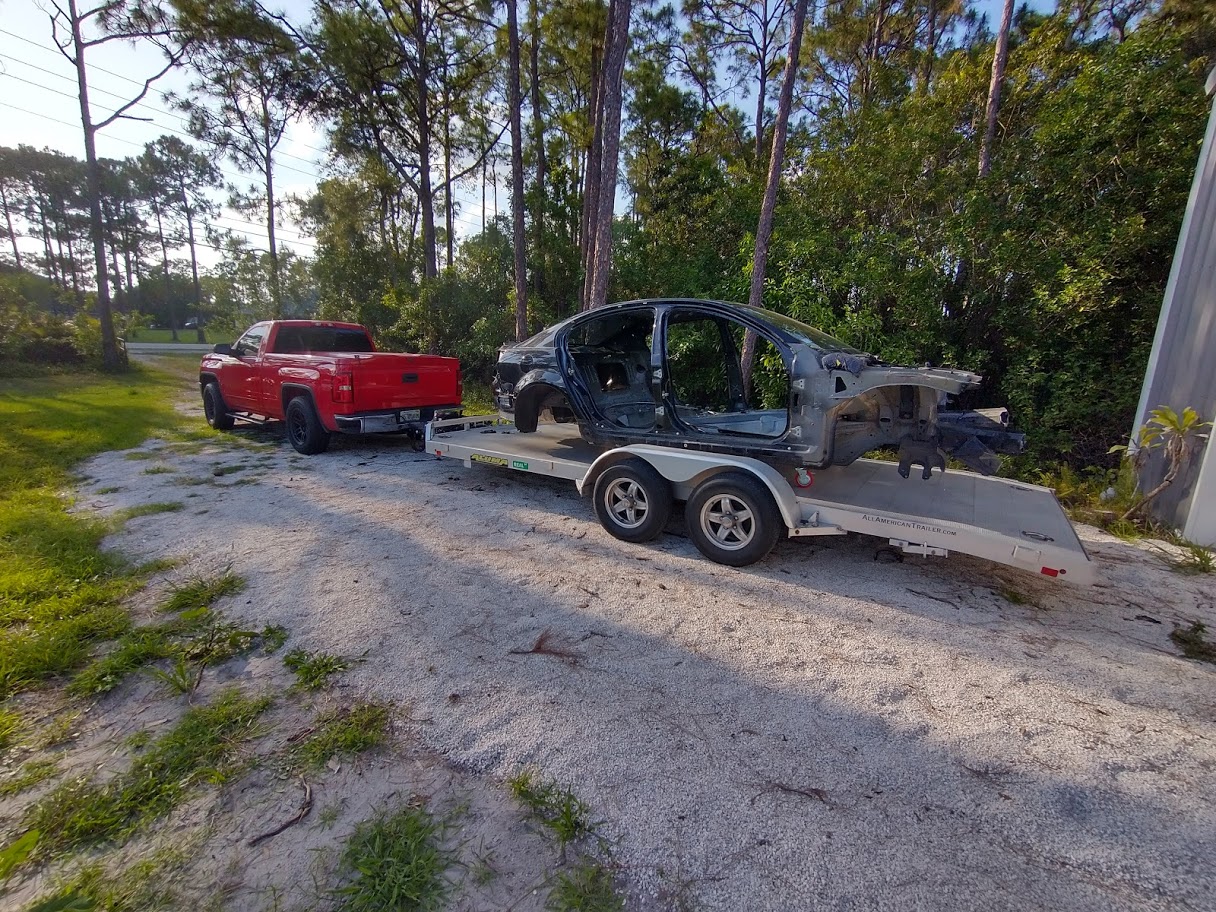 Things start to get real when you pull your daily driver into the shop for a project. 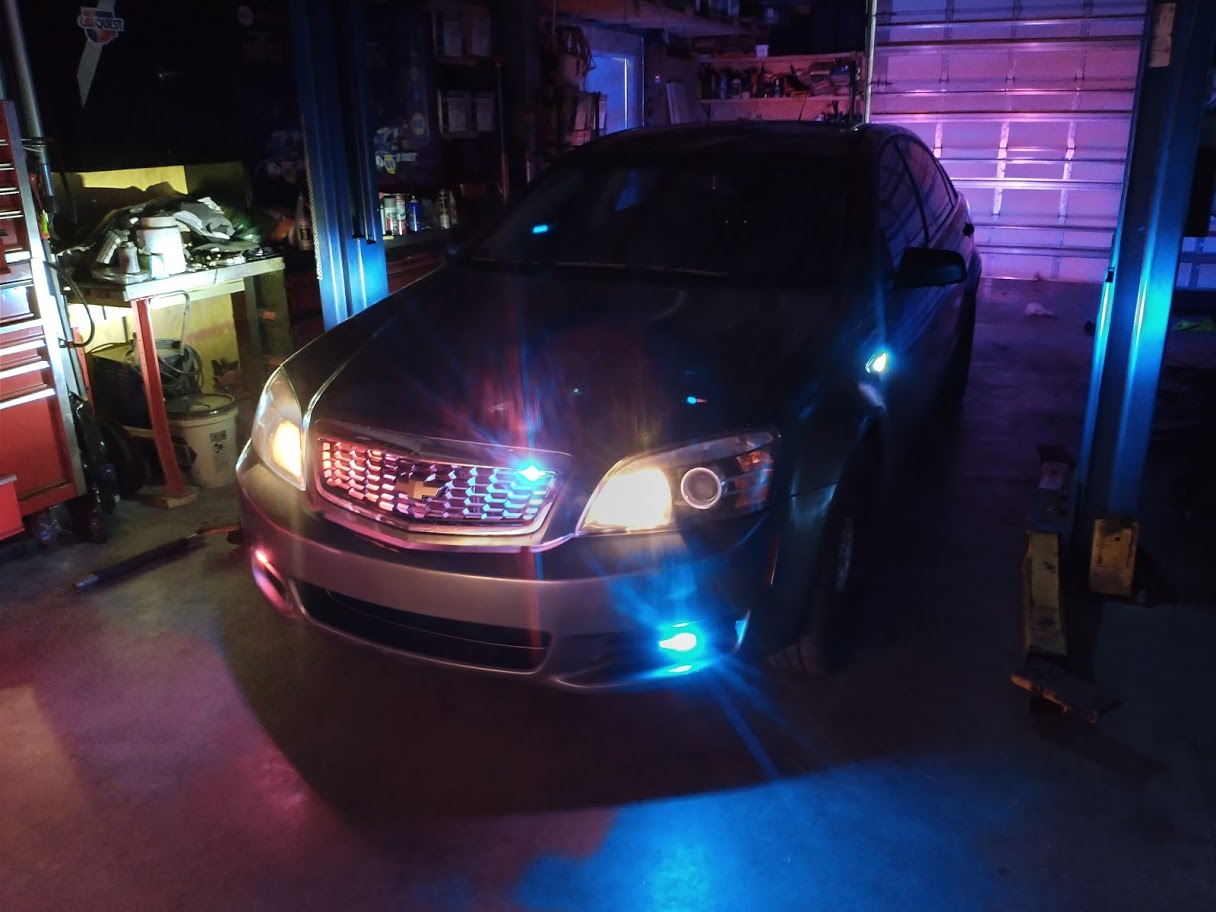 Had to give her a proper send off before pulling the batteries. 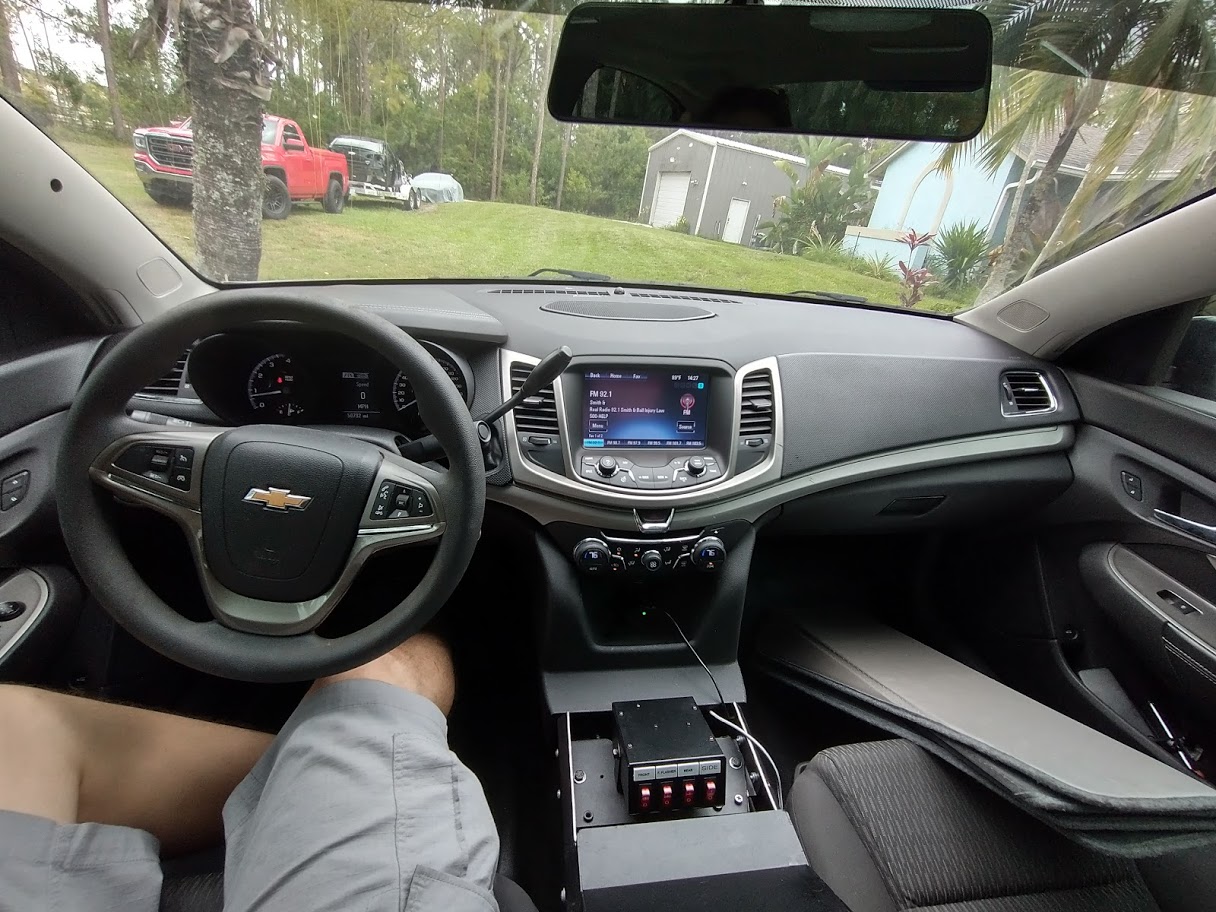 For reference, here is where we are starting at with the interior. 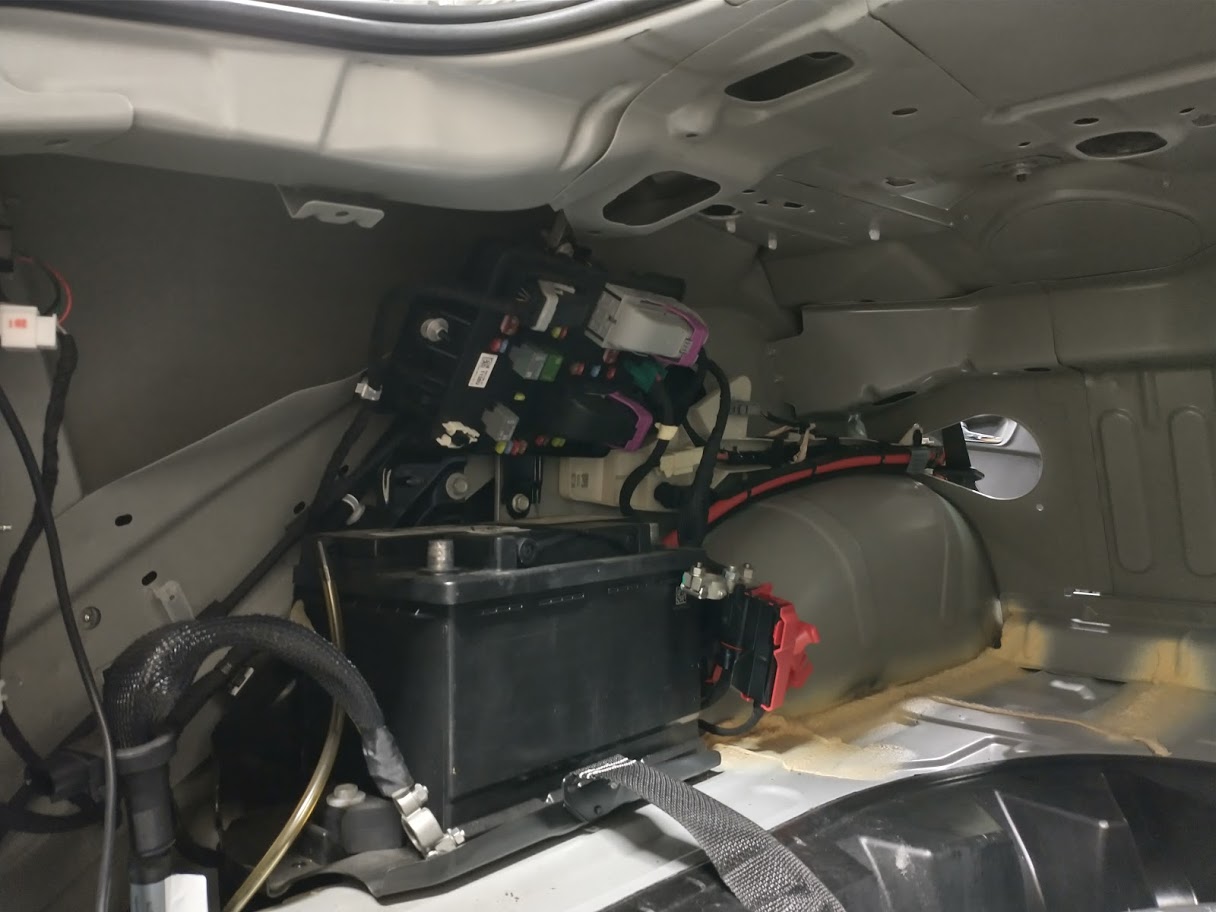 I started pulling it apart, ass first. Took out all the trunk carpet and trim, and then made my way to the rear seats, rear deck, and pillar trims. Got most of the harness out from the trunk and rear deck, along with the rear fuse box, FPCM, batteries and mounting trays. The SS has a couple more modules in the rear along with the Bose amplifier. So much nicer pulling apart a car that hasn't been wrecked and hasn't been sitting.

When I got to the FPCM, I was alarmed for a few minutes, as it is vastly different from what the SS unit looked like. It mounts on the underside of the battery tray, and I already tossed the SS battery tray because it was smashed from the accident. 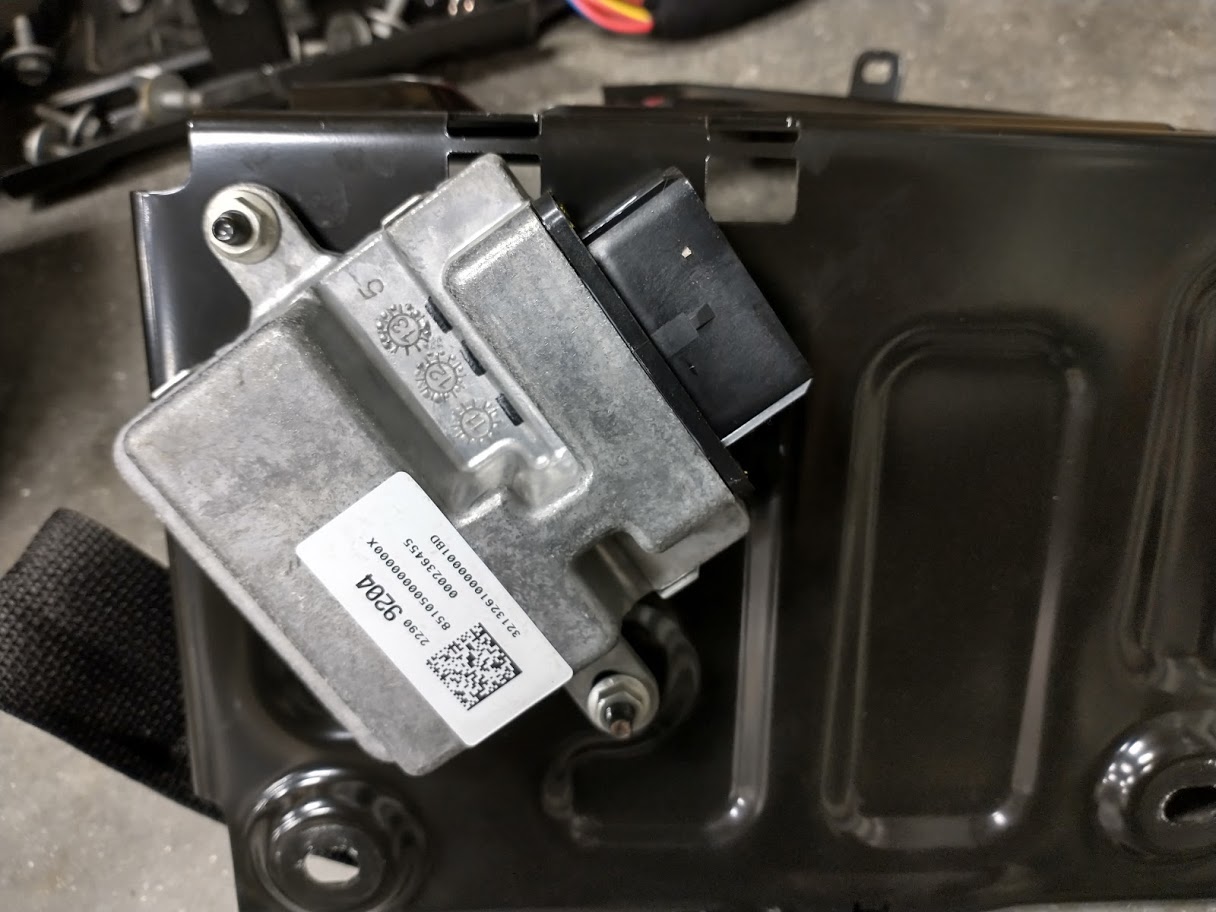 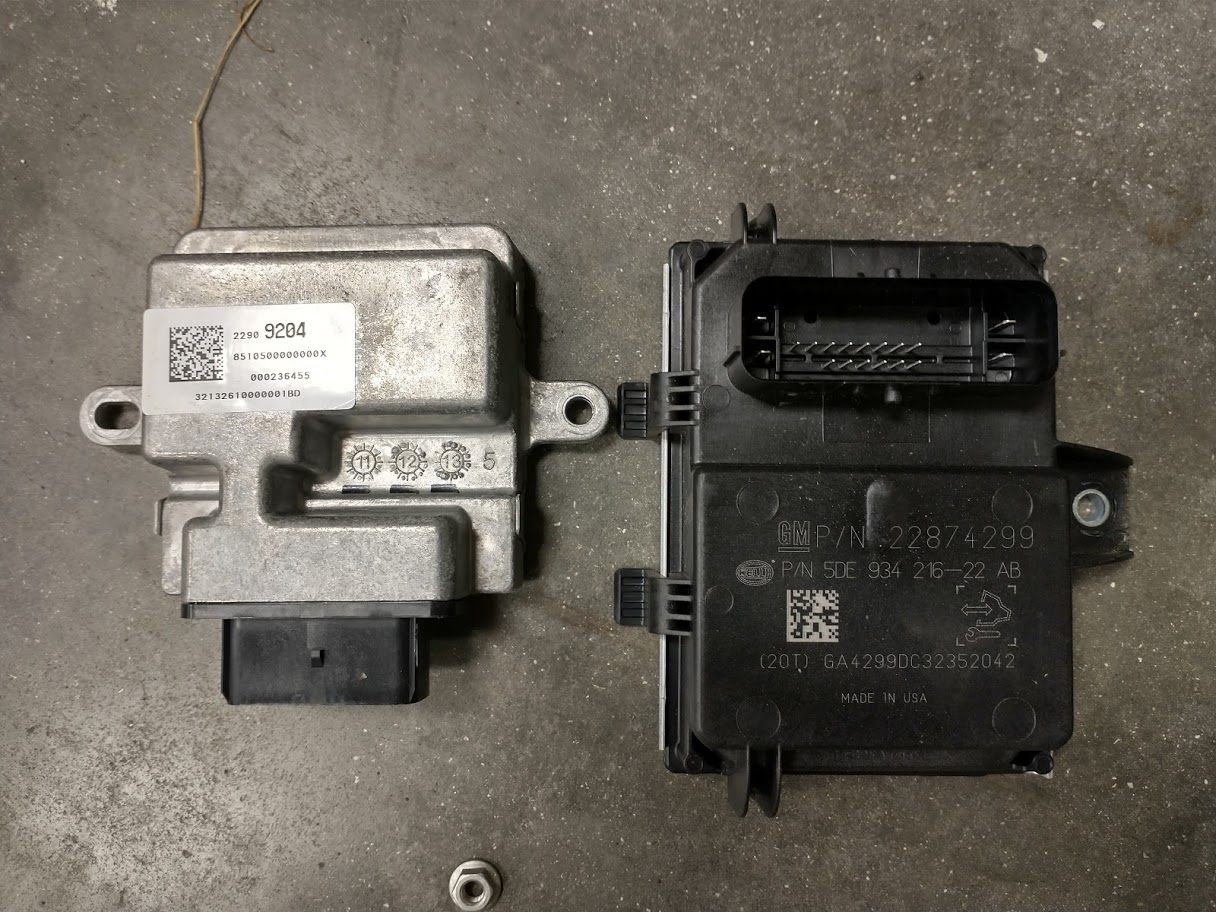 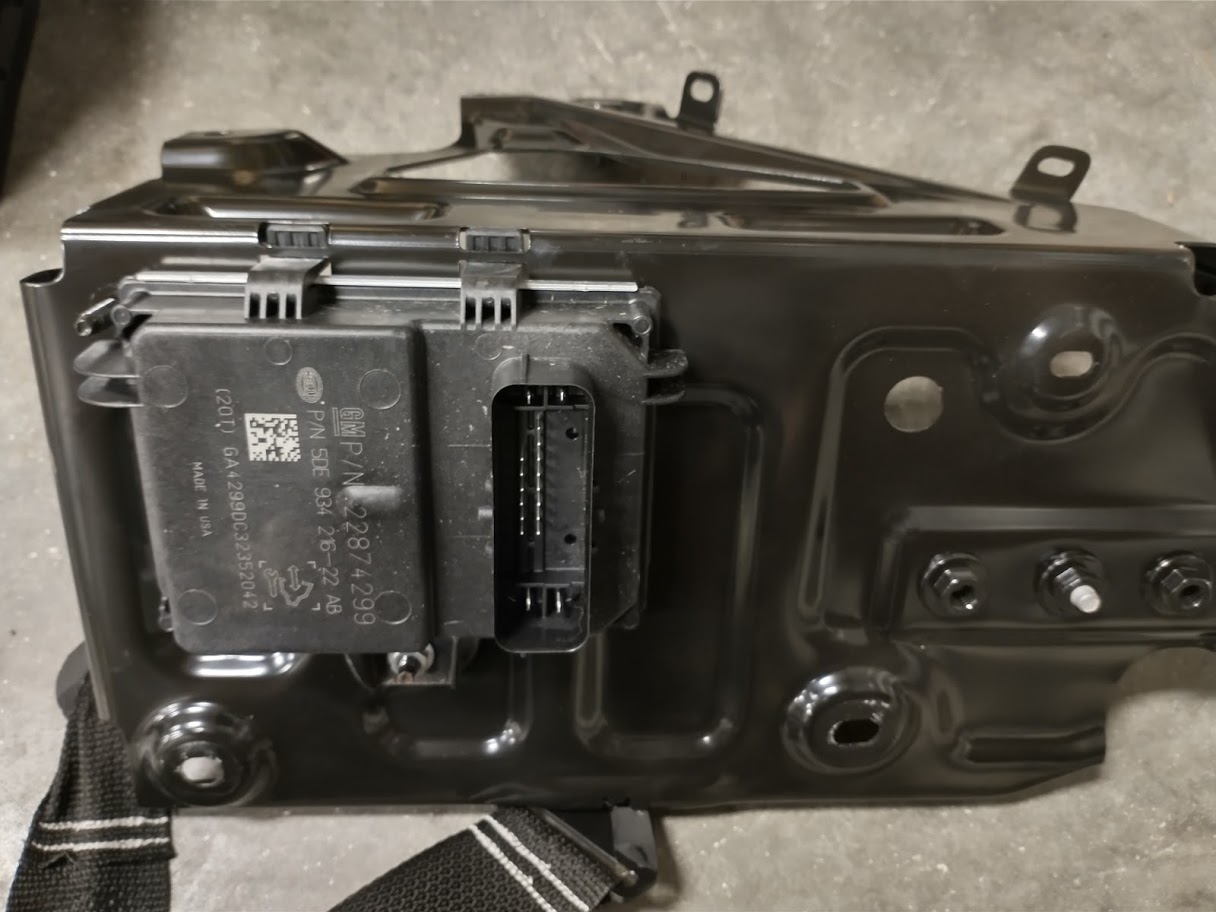 As you can see, the metal (Caprice V6) FPCM mounts completely differently from the SS FPCM. However, on further inspection I found that GM made mounting provisions for both on the battery tray. SS mounts with 2 clips and 1 bolt, Caprice unit uses 2 bolts. 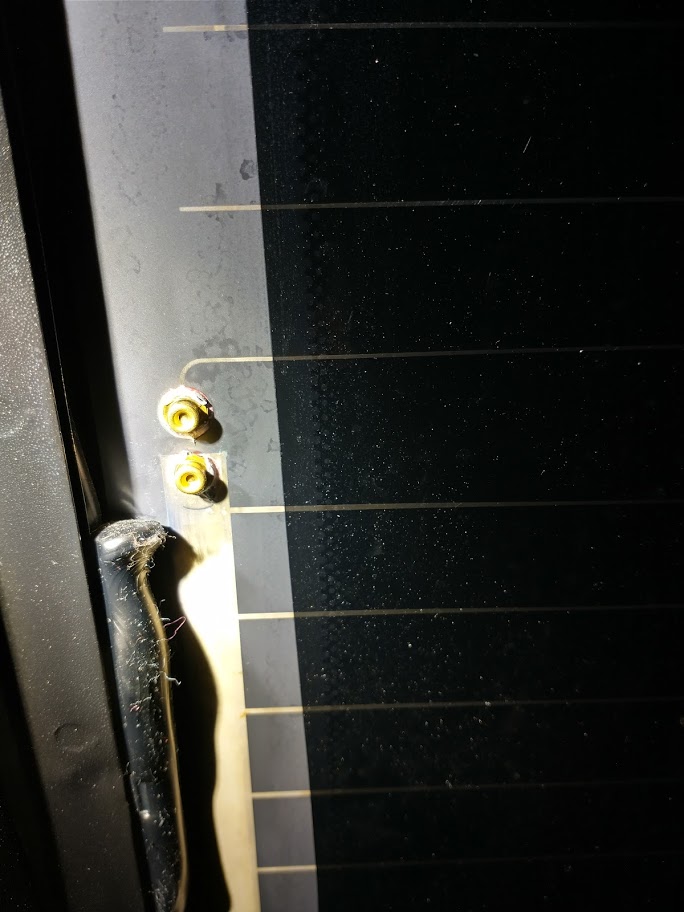 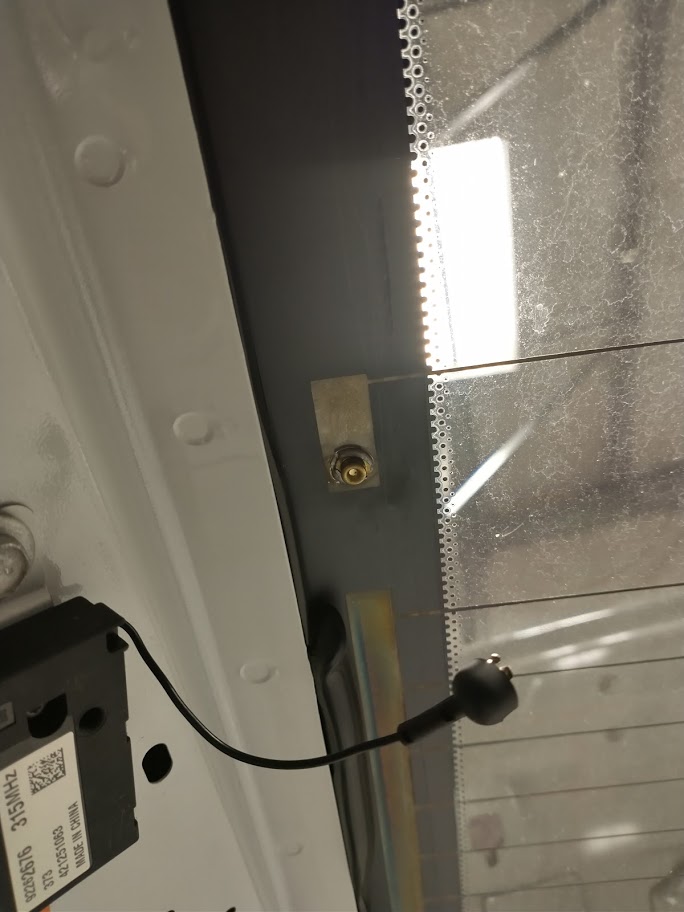 As Steve Walker mentioned, there is an extra antenna on the rear window of the SS compared to the Caprice glass. Going by the part description, it's for the radio. Going to see if I can find more detail than that. On the SS one prong goes to it's own section of what looks like the defogger lines but are not. The second prong does share the defogger grid as its antenna. Probably trivial to hide an (extra) antenna in the C pillar trim in lieu of the window mounted strip. Also, the units are marked 315mhz, which I know is the frequency used for the TPMS system and (generally) key fobs. So if it's for that it is a little more pressing than the radio.

Anyway, I started unbolting the seats but got called away. More to come soon.
Top
Post Reply
32 posts